Horizontal coordinate information is referenced to the North American Datum of 1983 (NAD83).

The use of firm, trade and brand names in this paper is for identification purposes only and does not constitute endorsement by the U.S. Government. Document accessiblity: These digital geospatial data files contain large amounts of geographic data that cannot be easily accessed by the visually impaired. If you have any questions about accessibility, please contact the author.

Historical land-use and land-cover data, available from the U.S. Geological Survey (USGS) for the conterminous United States and Hawaii, have been enhanced for use in geographic information systems (GIS) applications. The original digital data sets were created by the USGS in the late 1970s and early 1980s and were later converted by USGS and the U.S. Environmental Protection Agency (USEPA) to a geographic information system (GIS) format in the early 1990s. These data were made available on USEPA's Web site since the early 1990s and have been used for many national applications, despite minor coding and topological errors. During the 1990s, a group of USGS researchers made modifications to the data set for use in the National Water-Quality Assessment Program. These edited files have been further modified to create a more accurate, topologically clean, and seamless national data set. Several different methods, including custom editing software and several batch processes, were applied to create this enhanced version of the national data set. The data sets are included in this report in the commonly used shapefile and Tagged Image Format File (TIFF) formats. In addition, this report includes two polygon data sets (in shapefile format) representing (1) land-use and land-cover source documentation extracted from the previously published USGS data files, and (2) the extent of each polygon data file.

During the mid-1970s, the U.S. Geological Survey (USGS) began to produce nationally consistent maps of land-use and land-cover (LULC) for the conterminous United States and Hawaii. Polygons of land use and land cover were delineated manually using aerial photography and mapped following a two-level hierarchical classification system described by Anderson and others (1976). The minimum mapping unit was 4 hectares for all urban and water classes and a few other categories such as "confined feeding operations" and "strip mines, quarries and gravel pits", and 16 hectares for all other classes. The USGS published these land-use and land-cover maps at 1:250,000 and 1:100,000 scales for the conterminous United States, Hawaii, and one quadrangle in Alaska.

The USGS developed the Geographic Information Retrieval and Analysis System (GIRAS) software (Mitchell and others, 1977) to digitize, edit, and produce cartographic and statistical output from the mapped information. The acronym "GIRAS" has been used informally over the years to refer to the software system, its digital file storage format, and the land-use and land-cover data set (only one of many GIRAS layers) created using the software. The data are currently (2006) distributed by the USGS in the original GIRAS file format on the World Wide Web (Fegeas and others, 1983; U.S. Geological Survey, 1998). In this report, "GIRAS" will be used to refer to the digital GIRAS-format files, and "LULC" will refer to the land-use and land-cover polygon data. A map showing a LULC data set for a single 1:250,000-scale quadrangle is shown in figure 1. 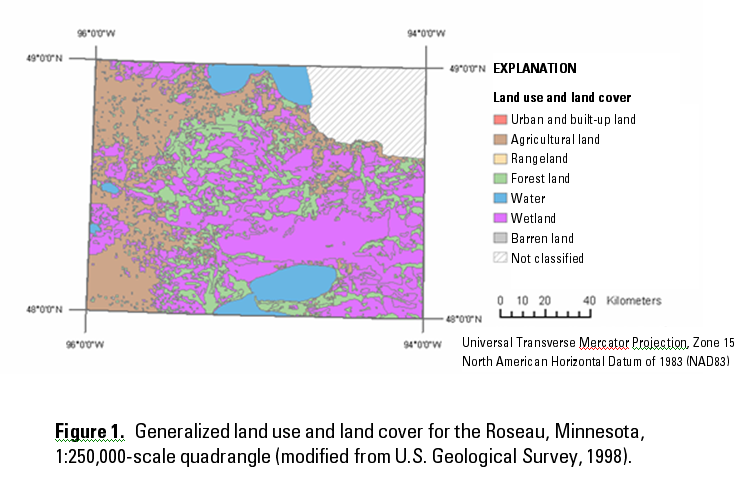 In the early 1990s, the USGS developed a procedure to convert the LULC data set to ArcInfo polygon coverage format so it could be easily used for geographic information system (GIS) analysis supporting water-resources applications. The U.S. Environmental Protection Agency (USEPA) was interested in using these data in ArcInfo format and worked with USGS to convert all of the quadrangles using the USGS-developed software programs (GIRASARC.AML and GIRASNEAT.AML). The conversion process included (1) converting the data from GIRAS to ArcInfo coverage format, (2) scaling the data to true Universal Transverse Mercator (UTM) coordinates from the 16-bit coordinate system used in the GIRAS files, (3) changing the coordinate system from UTM coordinates to Albers Equal-Area coordinates, (4) inserting 1:100,000 scale information where available to create a single combined data set for each 1:250,000 scale quadrangle tile, and (5) removing polygon areas that fell outside the quadrangle boundary. USEPA posted the data (in ArcInfo™ EXPORT format) on its FTP site in 1994, and later on its Web site (U.S. Environmental Protection Agency, 1994).

In the early 1990s, the USGS began to use the LULC data to characterize watersheds and other areas studied by the National Water-Quality Assessment Program (NAWQA) Program (Gilliom and others, 1995). As NAWQA researchers began working with the LULC data on a national scale, they noticed that minor errors existed in the EPAGIRAS national data set. Some of these errors existed in the original GIRAS data files, and some were minor problems introduced during the conversion from GIRAS to ArcInfo format. A comprehensive effort was made at that time to download all the EPAGIRAS data sets and fix some of the obvious errors in the data. In the few cases where the ArcInfo files were unusable, some of the original USGS GIRAS files were downloaded and processed into ArcInfo coverage format to match the EPAGIRAS data sets.

This "NAWQA version" of the LULC data set has been used in several NAWQA applications for planning and data analysis. A method was developed to estimate new residential areas by combining the LULC data with U.S. Census population data compiled at the block-group level (Hitt, 1994). Gilliom and Thelin (1997) used this information together with agricultural census data from the U.S. Department of Agriculture to map agricultural land to be used in water-quality assessments. Stewart (1998) developed a land-cover data update algorithm based on a combination of the GIRAS data and a digital land-cover classification based on satellite imagery.

Although the quality of the NAWQA version of the LULC data set was sufficient for the above analyses, it still included polygon coding errors and data gaps where polygons did not meet exactly at the quadrangle boundary. The USGS implemented GIS processing steps to enhance the NAWQA version of the LULC data set, and created additional polygon data sets that document the land-cover data sources in a geographic context (Price, and others, 2003). This report documents these data sets and includes them in commonly used GIS data file formats.

The data-processing flow diagram describing the methods used to develop an enhanced LULC data set is shown in Figure 2. The steps included editing of the LULC polygon data, editing to the polygon LULC codes, converting coordinate systems and data formats, and developing polygon data sets that document each quadrangle tile of LULC data. 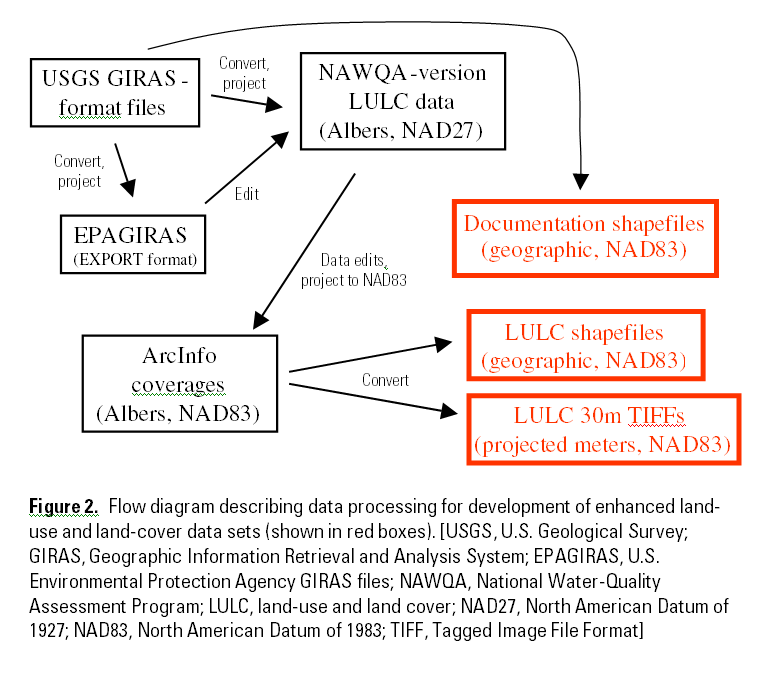 Careful examination of the data set revealed serious problems in four quadrangles (Mitchell, S. Dak.; Scranton, N.J./Pa.; Palestine, Tex.; and Cedar City, Utah) that needed to be addressed. The Mitchell, S. Dak., quadrangle data were converted again from the raw GIRAS files. The line work in the Scranton N.J./Pa. data was consistent, but the land-cover values in the GIRAS file did not translate into ArcInfo correctly. A paper copy of the USGS 1:250,000-scale LULC map of the Scranton quadrangle was then used as a backdrop to assign proper land-use codes to the polygons. One-quarter of the 1:250,000-scale Cedar City, Utah, quadrangle had no data in the USGS GIRAS file, so the USGS 1:100,000-scale LULC data for that void area were inserted. In addition, the data set did not include data from the State of Hawaii; therefore, the Hawaii GIRAS files were downloaded, converted to ArcInfo coverage format, and appended together (because they shared the same source date). The single LULC quadrangle available in Alaska (Valdez, Alaska), also was not included, so it was converted from the raw GIRAS files as well. These edited and new quadrangles were included in the collection of data sets, resulting in complete coverage for the conterminous 48 States, Hawaii, and one quadrangle in Alaska--a total of 471 polygon data sets.

Coding errors in the EPAGIRAS data set were easily identifiable by visual inspection of GIS-generated displays of the data sets. Some of these errors reflected missing labels or polygon boundaries in the original GIRAS file, and some resulted from labels being moved as part of the conversion process from GIRAS to ArcInfo. An example of a polygon that is miscoded (labeled "0") is shown in figure 3. Arc Macro Language (AML) software was developed to aid in interactive checking and repair of LULC data for coding errors. The older Arc Workstation software (Environmental Systems Research Institute, 2002) was selected for this application because of its easier-to-use AML scripting environment and better support of ArcInfo coverage editing than newer ArcGIS software. The application allowed users to navigate by mouse clicks through all the polygons that had missing or incorrect land-use codes and correct them. The application also included buttons to display two reference data sets in the background: (1) a point coverage of all of the original labels in the GIRAS files (unmodified by GIS polygon processing operations), and (2) the 1992 National Land Cover Data Set (Vogelmann and others, 2001; U.S. Geological Survey, 2002). In rare situations where the proper land-use code was not clear from the context of the land use of the surrounding polygons, the reference data sets were used to help select an appropriate code. A form menu from the AML application is shown in figure 4. A few of the land-use coding errors caused by missing polygon boundaries required the editing of the polygon boundaries to split a single polygon into one or more parts. 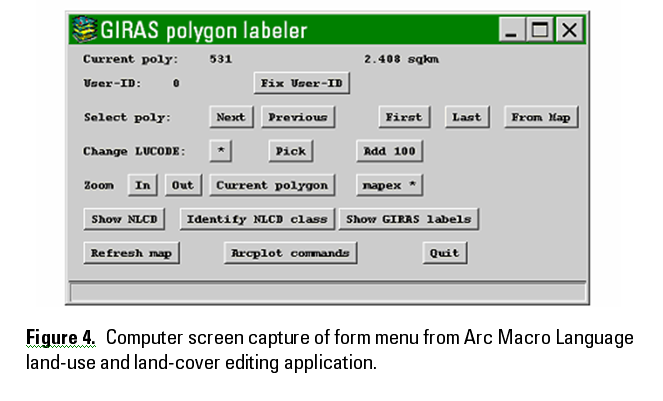 The shapefiles were named using a spatially based naming convention to simplify data access; for example, G39083 is the data set with its lower left corner located at 39 degrees south latitude and 83 degrees west longitude. The data were projected into geographic coordinates referenced to the NAD83 datum and converted to shapefile format. The original GIRAS files included documentation (metadata) in the header records of each data file that recorded various details about the GIRAS file. These included the title of the map sheet, the nominal scale of the map sheet (1:250,000 or 1:100,000), the data file creation date, and the date of the source materials (aerial photographs) used to create the land-use and land-cover data. All of this information was either incomplete or not easily available in the land-use and land-cover data files in ArcInfo format, so a complete download of the raw GIRAS files was made from the USGS Earth Resources Observation and Science Data Center, and a polygon coverage ("src_poly") was created from this information that represents the metadata as polygon attributes. In addition, a polygon data set ("tilepoly") was created documenting the extent of each of the 471 tiles. This separate tilepoly data set was required because many of the land-use and land-cover data coverage tiles were created from several different GIRAS files, some of which have different source dates.

Data files available in this report

The following data sets are available as part of this report. To access the data sets, please follow the hypertext links below.

This is a collection of 471 polygon shapefiles of land use and land cover published by the USGS, with minor attribute and geometric edits.

This is a collection of six image files (in TIFF format) that represent the same land use and land cover information contained in the shapefiles. However, the polygon areas are represented as 30-meter-resolution gridded data sets referenced to Albers Equal-Area map coordinates (conterminous United States) or UTM map coordinates (Alaska and Hawaii), NAD83.

These polygon features contain information about the source information, which was extracted from the GIRAS format files currently available online from the USGS.

These polygon features represent the spatial extent of each of the land-use and land-cover shapefiles released in this report.

Document accessiblity: These digital geospatial data files contain large amounts of geographic data that cannot be easily accessed by the visually impaired. If you have any questions about accessibility, please contact the author.

Send questions or comments about this report